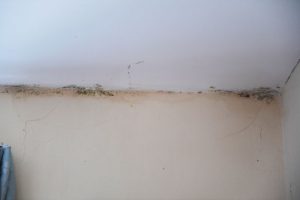 Tenant Kirsty Higgs has been living with damp and mould for three years.

The 28-year-old says the damp and mould has now reached her bedroom, bathroom, kitchen, living room and spare room.

And she says she has been complaining to Aspire Housing about the state of her Clayton home ever since she moved in.

“You can see the wetness on the walls and the cracks in the windowsill. The condensation is bad and it doesn’t matter if I have the windows completely open. There’s mould all around the windowsill and at the top of the roof.  Most of the mould was black but is now turning white. You try to clean it up but it’s disgusting and it gets you down. I’ve spent that much on mould spray and it comes back with a vengeance. I have got depression and anxiety and it’s getting me down all the time because you can’t really go out much apart from your exercise so I am stuck in here all the time.”

Kirsty had been waiting for a ‘third or fourth’ surveyor to visit her property. However the appointment has been cancelled due to UK Lockdown.

She added: “I pay my full rent – and I always have. I have stuck to my end of the bargain with the contract but they have not. I’ve asked to be moved because of my mental health issues – and they’ve said that can’t happen.”

Aspire Housing has confirmed that Kirsty’s latest appointment was cancelled.