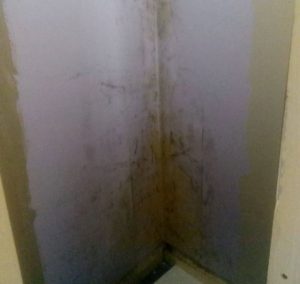 A MUM-of-seven claims she is struggling to breathe in her mouldy council flat where damp has forced her to chuck Fout “£1,000 worth of ruined clothes and shoes”.

June Williams, 64, has demanded compensation from Swansea Council, as she’s fed up with “being fobbed off” and constantly having to wipe down walls with bleach.

She said: “There has been a mould issue ever since I first moved in. The kids were always ill when they were living with me. I have complained, and asked people to come out, but inspectors say it is just condensation, and I believed them, but I always thought something wasn’t right – they were fobbing me off. I’ve got damp issues in my bedroom on both walls, I wipe it down with bleach, but it comes back.”

The gran said that when she complained to the council about the mould, inspectors who visited told her that it was her fault for not opening windows, rather than being a damp issue. However she’s adamant the property is well-ventilated, but badly built. Several years ago the council did concede there was “rising damp in the living room, and they treated it.”