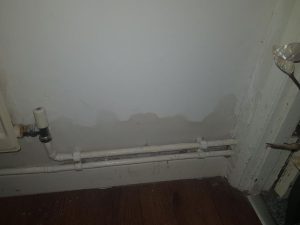 Joanne Burgess, who lives in Brinnington, says that the issue could also be causing medical problems for her and her teenage daughter and five-month-old baby.

Joanne says that the issue has been going on for around four years, and has been confirmed by two contractors. She added: “They have seen the roof and it can’t be coming from above — our neighbours up there have no damp whatsoever. They sent two completely different people who both said it was rising damp — they both had a fresh pair of eyes to look at it.

Joanne has also contacted her MP, Navendu Mishra, about the problem — who in turn has spoken to Stockport Homes. The organisation has already carried out some re-plastering in the property, but Joanne says that more immediate action needs to be taken after the issue re-emerged.

She told the MEN : “I do not want to be here — I just don’t want to come home. It is really depressing, not nice. They need to sort it or move me. They know how much I am struggling. I understand there’s a pandemic on — but it needs to be sorted. It’s horrible.”