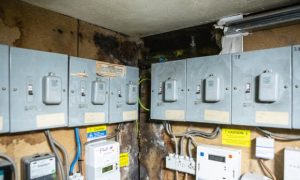 After three years of water leaks, mould has permeated a resident’s home. And other London & Quadrant tenants are also living in appalling conditions.

The Kent flat is owned and managed by London & Quadrant (L&Q), one of the UK’s largest housing associations, and she says that years of unresolved damp and defects have led her to contemplate suicide.

The 60-year-old, who is bipolar, was moved to the property in 2018 after leaving a women’s refuge, also run by L&Q, and claims it was damp from the outset.

“I was told that it was that, or nothing,” she says. “The mould has got so bad it’s in my food cupboards, destroying my possessions, and my mental and physical health, but when I complained I was just given a bottle of mould spray.”

Matters came to a head in June when leaks from the flat above caused the bathroom ceiling to collapse. L&Q removed the debris, but declined repeated requests to move her to new accommodation.

It only accepted that the conditions were insanitary when the Observer intervened, and is now seeking alternative accommodation. It has also agreed to pay compensation for the damage to her possessions.

An Observer exposé of appalling living conditions in 2018 prompted L&Q to commission an independent investigation, and it promised reforms following the investigator’s critical findings. Three years on, it is still failing to address reports of unsafe and insanitary accommodation, according to tenants who have contacted us.

Antaine O’Briain, a resident of an L&Q block in west London, says he and fellow residents have spent six years trying to resolve damp problems and rotting windows.

“Rainwater drips on to the electricity meter cupboard. Some residents are scared to open their windows for fear the frame will fall out, as has happened already. None of the flats has adequate central heating, and the basement is so overrun with vermin refuse collectors refuse to enter the bin area,” he says. “L&Q promised renovations would begin in 2018 and then, in 2019, but nothing happened and the place is falling apart.”

L&Q blamed the delays on the planning application process. Scaffolding was erected last month, two weeks after the Observer got involved.