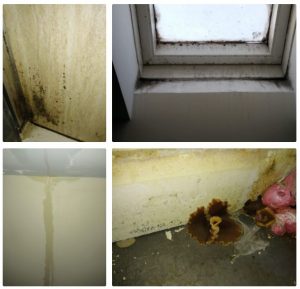 A tenant has been living with damp, mould and even mushrooms for almost a year.

Michael Sandilands, who lives in supported living accommodation on Oldham Road in Rochdale, Greater Manchester, due to having mild autism and Asperger’s as well as epilepsy has been attempting to move out. He says that his flat is ‘falling apart’ because of the damp and mould which he says is largely cause by a leak and broken ventilator fan.

“If I’m truly honest it’s affected my health a little bit because I have asthma and it’s caused a lot of coughing. I want to move but I’m getting nowhere.”

Michael added that maintenance workers from Halo had continually painted over the damp, causing it to reappear and had only removed the one big mushroom from the bathroom leaving other smaller ones. He also said the ventilator fan is broken as it has a hole in the back and said he has been in contact with the environmental health services and the Citizens Advice Bureau about his situation.