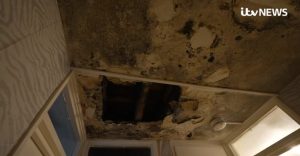 A new report produced by the Building Research Establishment (BRE) highlights the vast sum of money that is spent treating health problems caused by living in substandard homes.

Researchers have analysed government data on the number and types of hazards- such as excessive cold, damp and falling down the stairs- found in homes in England to calculate how much they cost the NHS.

The highest cost to the NHS -around £857 million- is spent on treating residents made ill by excessively cold homes.

The longer-term impact of low-quality housing, including people left unable to work or needing care, costs society £18.5 billion pounds every year, according to the BRE report.

The top 5 household hazards are:

Tikysha Thomas understands full well what it feels like to live in a hazardous home: her walls are thick with black and green mould and her floors are constantly sopping wet from a leak in the bathroom.

Her and daughter, Kacie, have lived in their flat owned by Hackney Council,in east London, since 2015 and have been living with severe disrepair for the last two and a half years.Previously Tikysha was fit and healthy, but since the mould in her home started to worsen she began experiencing severe shortness of breath and wheezing.

“The moment I step in my chest feels tight. I can feel all the moisture in the air,” she said.

“It is uncomfortable. As my daughter is walking up the stairs I am trying to not let her touch the sides so the mould and the damage doesn’t get on her hands.”

She was subsequently diagnosed with asthma and is forced to use her inhaler up to ten times in the night.

She is particularly worried as her daughter has started coughing too, making Tikysha fearful she also has developed the condition.