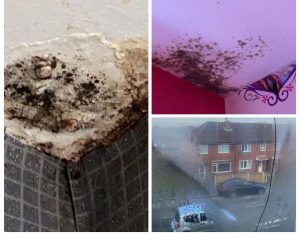 A MOTHER of two disabled children said has been forced to endure persistent damp in her home, with her landlord failing to rehouse the family.

The 34-year-old, who wishes to remain anonymous, says that the family, including her partner, her 12-year-old son who is autistic and 11-year-old daughter who is currently going through a diagnosis process, moved into the Clayton-le-Moors house in 2016. Since then, the property has been plagued with damp, mould, a leaky roof and cracked windows but the family has not been rehoused by Onward Homes.

The mother said: “I break down crying every day, because I don’t want my children living in a place like this. “It’s why I don’t like cooking in the kitchen or bathing in the bathroom, because of the damp and the mould.” She added: “I’ve been to counselling, because it’s been getting to me so much.”

The mum was forced to give up her job because of the extra care her children require, however this has meant that renting somewhere else privately has been out of reach while claiming Universal Credit has meant they don’t qualify for additional help. Ideally, she would like to be rehoused near her network of family and friends in Clitheroe and for health reasons, having been diagnosed with a spinal disorder that is likely to worsen.

The mother-of-two said: “They’re refusing to rehouse me. I’m sleeping in the living room because I can’t sleep in that bedroom with the cracked window and mould spores. “Me and my son are both asthmatic which is dangerous for both of us.” She has now been in touch with a solicitor in an attempt to secure a settlement from Onward Homes, however she still hopes to be rehoused.