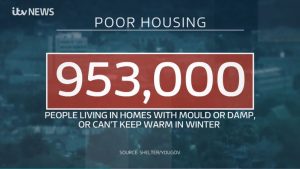 Courtney Wilkinson and her two children, aged one and five weeks, were forced to move out of her council flat after it became infested with rats.

After her daughter Lillie-Marie needed hospital treatment after she was bitten on the foot by a rat, they moved into her aunt’s house and are currently sleeping on the living room floor.

“I was sat here, Lillie was stood here next to me, playing with a toy and she went bright red and started screaming and I looked down and the rat was just there chewing at her at the bottom of her foot so I picked her up and screamed get off get off, but it didn’t it was just attached to her foot. It’s horrible”, she said, “I don’t want to bring my babies back here.”

Courtney’s experience is extreme but a report from housing charity Shelter out today says 1.4 million people in Yorkshire and Northern Lincolnshire suffer from poor housing. Decades of neglect have left Britain’s housing system on its knees and a safe home is everything but there are millions that don’t have one and the pandemic is making it worse.

In Barnsley Katie Hoyland is enduring her own housing nightmare. She has severe asthma and has been hospitalised twice – she says as a result of the rotting floor and damp walls of her house. But Katie’s greatest fear is even worse:

“That I’m going to die either from a severe chest infection, an allergic reaction or falling through the floor and damaging myself”

The government says it’s unacceptable for people to live in unsafe accommodation and says it’s investing more than £12bn in affordable housing over the next five years to help councils, housing associations and others deliver new homes. Leeds City Council said: “We are very sorry to hear about what happened to Ms Wilkinson’s daughter and have been working with her for a number of years to support her with challenges she has in managing her tenancy along with other partner agencies.

“We were made aware of issues around the dumping of rubbish in the garden of the property in April 2019 which resulted in reports of rats in May 2020. A further report of pests was reported in April 2021 and we continue to seek a permanent resolution.”

In Barnsley the council said: “We would encourage the tenant to contact us as a matter of urgency so we can resolve any issue they have.”

But for Courtney, she’s now facing the prospect of filling the skip outside her flat with many of her ruined belongings.

“I’m just heartbroken that I’ve had to thrown the whole of my home away after working so hard to get it looking nice and now I’ve got to throw it all away and start afresh again.”

Officials say they’re seeking to move Courtney and her family into temporary accommodation. The flat she fled is to be deep cleaned.