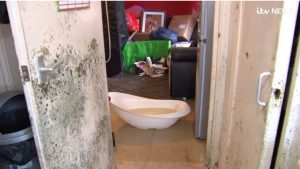 A mum who was forced to live with rampant mould, leaks and damages in her council flat with her two young boys says she felt like screaming with joy when she was offered a new home.

It comes after an ITV News investigation into the “unliveable” council housing conditions some have endured during lockdown – and at least dozens of phone calls from Fransoy Hewitt and her neighbours to their landlord Croydon Council. Fransoy’s flat in Regina Road, Croydon, was so damaged by mould, damp and leaks, that she and her two sons, aged five and seven, were forced to cook, eat, play and sleep in a small bedroom, the only undamaged room.

She told ITV News earlier in March: “I just feel like I’m going to kill myself if I continue like that.” Since the broadcast and publication of ITV News’ story on Monday, the council has offered the mum-of-three a permanent two-bedroom house. Fransoy, who moves into her new home on Monday, described what went through her mind when she was told she was going to get the property: “I couldn’t believe my luck. I wanted to scream, like, ‘oh my god!'” Asked how it felt to open the door to the house, she said: “It feels amazing. I actually can’t believe it… It feels great.” On the state of the property, she said: “I actually checked it when I came. I was like, ‘No mould, no leak, oh my god! Luck!'”