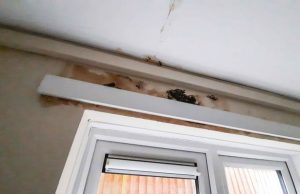 Lisa Grainger, 31, who has Cystic Fibrosis, has been desperate to move from her damp one-bed flat in Kingstanding for two years.

The 31-year-old had a double lung transplant in March 2018 and moved into the Birmingham City Council property in October of that year.

Lisa was in and out of hospital with chest infections every two-weeks by Christmas 2018. When she left hospital in June 2019 she moved in with her mother in Great Barr and has not returned to the flat due to its damp condition.

Lisa, who continues to pay rent and bills at the flat, is on the donor list again for a second double lung transplant – with her body rejecting the first set.

Her family claim that living in the mouldy flat “has not helped her health” and doctors advised her to move to alternative accommodation as it could “hasten her death.”

Despite bidding on many properties and submitting evidence of her life-threatening condition Lisa feels like she has been “lost in the system”.