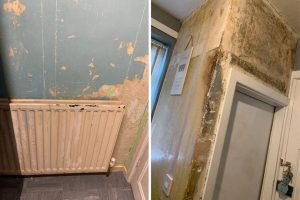 A mum has complained about a “disgusting” and “dangerous” house she was given by her local council last year.

The mum and her one-year-old son moved into the property, in Cort Crescent, Braunstone, back in December 2020 – and the next six months have caused her nothing but problems, she says. She has had to make a series of complaints to Leicester City Council about a number of problems, including mouldy walls, a bathroom which she believes unsuitable for a young child and a fireplace which was coming away from the walls.

She has also raised concerns about the “dangerous” condition of her garden which has resulted in her son tripping and hurting himself. The woman says she has raised the issues multiple times with the council, but that the official assigned to her home deemed the work needed as “cosmetic” and her “responsibility to fix”. She is now worried about the long-term impact on her and her son’s health, and wants to move to a different property instead of waiting for improvements to be made.

She said: “I’ve tried everything, I spoke to the council officer and he came down and looked around the house. “He told us that everything in the home is my responsibility and that I just need to buy some cheap damp paint, cover it, and paint over it. “He was told that most of the work needing doing was cosmetic, and that I needed to fix it myself. “The issues he reported included damage to the window-frame and door handle, rather than the bigger things that needed doing.