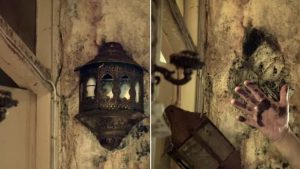 See the conditions Mehdi has to live in, including a leak running down his walls found to be contaminated with faeces – the flat has been declared to be “unfit for human habitation”

“Please be careful with all the water. Don’t slip,” said Mehdi Sheikh when he led ITV News Correspondent Daniel Hewitt into his home as part of our investigation into the country’s housing scandal. Living in among mould, and as we later learned, faecal contamination, he is used to trying to stay safe and healthy despite the odds. Mehdi suffers from chronic back and leg pain, which affects his mobility, and says the squalor he lives in is only adding to his problems.

“This is what’s making my breathing really bad – day in, day out,” he said. I’m waking up at night with a breathless fatigue because I’m feeling suffocated in here. My chest is feeling congested… I am on literally on the verge of nervous breakdown.” Mehdi says he now has to rely on a respirator to get by.

For 17 years he’s lived in this council flat in south London. Last November a leak, that went unfixed, has now left his home uninhabitable. He’s placed towels and rugs down on top of his carpets in an attempt to soak up the water. They make little difference and are sodden when we arrive.

“They get squeezed out twice a day. And obviously they get put on again and by next morning, that’s how they are.”

We asked Jeff Charlton, an environmental health inspector, to assess the flat and his findings confirmed Mehdi’s fears – and more. The extractor fan in the toilet was the wrong way around, “actually blowing air in, instead of extracting damp air out”. He found a “100% chance of electrocution” at points in the property. Worse still, he said he could assume the leak was not just water.

“I don’t know whether that’s sewage just dripping through, bath water, a leaking pipe… but I must assume that it’s contaminated.” His predictions were proven correct when bacterial analysis we had conducted on the water leak indicated “significant faecal contamination”.

Lewisham Council’s own independent inspection of Mehdi’s property also found the conditions were “unfit for human habitation”. The response has been “simply pathetic,” Mehdi says.

“Nothing has been done whatsoever. Because they don’t have to go and live like the way I am living. It just feels like living in a slum. And I just simply don’t know what to do. [I feel] totally helpless. I don’t feel like even going in there because it stinks. I don’t feel comfortable. It doesn’t feel like a home.