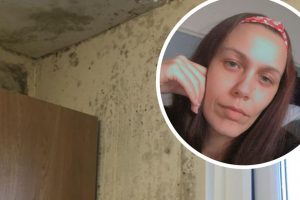 A woman says spending the coronavirus lockdown stuck in a flat “riddled with damp and mould” has made her ill.

Kirsty Hampshire says she suffers from asthma and her mental health is at “rock bottom” after more than a year of breathing in damp and mouldy air at her council flat in the Dollis Valley Estate, Underhill. The walls of the flat have been covered in black and green mould that is caused by a leak from a balcony in an upstairs flat. But despite telling the council’s housing arm, Barnet Homes, about the leak in November 2019, Ms Hampshire says workmen only turned up to fix it last month.

“I am having to use an inhaler,” she said. “If I go for a walk, I get out of breath – but I never used to. I have never had asthma or any breathing problems before. It is making me so depressed. I haven’t slept in a bed since October 2019 – I am sleeping on the floor in my living room. All my belongings are ruined, and everything smells damp and mouldy.”

Ms Hampshire told neighbours had told her the flat’s previous tenant was moved out after complaining about damp in the flat, meaning it had been an “ongoing problem”. She added that after more than a year of inaction, workers “all of a sudden” arrived to put up scaffolding and fix the leak after she told Barnet Homes she had contacted a newspaper. Ms Hampshire stated she felt the problems had been “brushed under the carpet” because the flats are set to be knocked down.