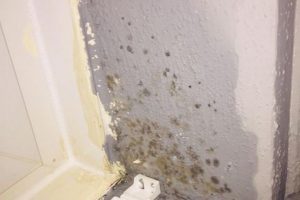 A Leeds dad is fearing for his children’s safety while the family is stuck in a council home plagued with black mould.

The family has spent the last few months pleading with council officials to visit their home in Bramley, but said he has not heard back from anyone since August. The father fears that the black mould is already having an adverse effect on their health with his child developing a cough which has not been linked to coronavirus.

The concerned father initially reported damp and black mould throughout his Bramley home in early 2020. He said: “As you can see from the pictures, it is really bad throughout the house. “But it really worries me that it is now in the children’s bathroom. I worry for their safety.” “My nine-month-old already has breathing issues. “My partner is six months pregnant – I should not have to worry about bringing our child home, but I am, very much so.”

After the council initially visited the property in August, the man claims that he was told the majority of the areas were not damp and the mould was due to condensation. He said: “When I was told that it was condensation, I thought he was joking. I’m sorry, but it’s clearly damp!

“Either way, I am paying my rent to live here. I am paying all my bills, all I want is to keep my family safe. “I know that’s not too much to ask for. The council know that they need to do more to help me and the family, so why haven’t they been since August?”