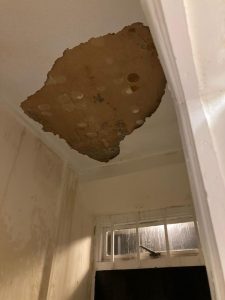 Lambeth council estimated the repairs would take ‘four weeks’ but the mum-of-two has been waiting months.

Cliona Addison, 33, was living in a home with leaks, damp walls and broken tiles for almost a year. Before Lambeth council moved her and her two children into temporary accommodation in June. The tenant claims the council have not made contact with her since the family moved into the accommodation and does not know when she is expected to return home.

Earlier this year, Lambeth council told My London that repairs to Cliona’s home will begin “once the home is empty” and estimated it would take “four weeks to complete, subject to drying out.” Now, three months on, Cliona says that she is still waiting for repairs to be completed in her home and is still living in temporary accommodation.

Cliona told My London: “They haven’t assessed it. I don’t personally feel like they can move me back there and, if they do, it’s going to take a long time for it to get better. “No one has gone to assess the damage, only random plumbers and electricians who call [me] up. I don’t know who I’m supposed to turn to now?”

Cliona visited her Lambeth home two weeks ago and had to kick the door down as it was swollen due to the leaks. She said: “The house is so messed up and the door was so swollen. I had to kick the door to get it open, the door can’t close now. We couldn’t shut the door, I had to leave it unlocked.” The mum of two described feeling “insecure’’ as a result of living in her temporary accommodation. “I’ve not had a housing officer or a liaison call me… Nobody has contacted me whatsoever, they’ve just left me in temporary accommodation,” she claimed. “I’m desperate because I don’t want to wait until Winter. It’s going to get cold and wet and I’m worried about transferring all my stuff in the vans.”

Cliona moved into the Lambeth property as a council tenant in July 2019 and dealt with a leak just four months later. She said: “The bathroom light has plastic casing [and] was full of water. We realised when the light was flicking on and off. “The [resident living] underneath me said this has been ongoing before I moved in.”

As a result of the issues at her home, Cliona said she experienced a “breakdown” whilst her son suffered with throat issues “due to living in a wet, mouldy, damp flat for more than 18 months.” The family are still waiting for those repairs to be made to their home in Lambeth, three months after moving into their temporary accommodation.