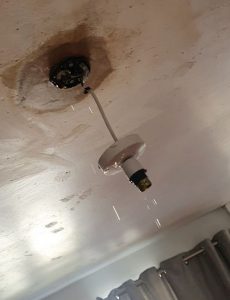 Unresolved damp and mould problems, insects, and a recent flood have made the house an unacceptable place to live and left her struggling with her mental health.

Claire, a mental health services volunteer, says she first reported the mould and damp in February this year. She said the damp team from Kirklees Housing came out to assess it, but that nothing has happened to fix the issues.

Claire told YorkshireLive: “I’ve got ants in my kitchen and living room. In my bedroom, because it got absolutely soaked from the flood – it just stinks of mould. “It’s a horrible damp smell. I’m just being passed back and forth and nothing’s really getting sorted – the situation is just getting worse. It’s just not nice to live in and it’s not nice when you have a daughter who suffers from asthma.”

Early in August, Claire’s problems were complicated when a burst pipe from her boiler flooded her house. “After it happened, I was told I had to stay in the property because they had nowhere else to put me and my two year old. It absolutely flooded my whole bedroom, flooring, clothes got ruined – it came through the ceiling of the living room, my sofa was soaked, my flooring was absolutely soaking,” she said. When the council had left that day after everything had flooded, they just kind of left me to it. I had to sort out emergency accommodation because the council wouldn’t help me, my housing officer wouldn’t help me. All they did was leave me a bag of rags to clean up with – that’s all the help I was given.”

Claire was given the property two years ago, and say she’s had issues with it from the beginning.