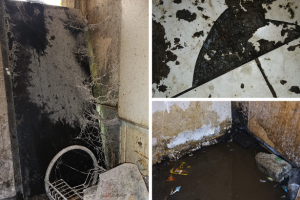 A vulnerable tenant from Hackney whose house has been declared ‘a risk to his life’ has shared photos showing the shocking extent of the disrepair in his home.

A 55-year-old man,  sought legal advice after complaining for two years about the state of his property. The resident, who wishes to remain anonymous, is at potential risk of electrocution, according to experts – as damp and water has spread all through his North London council house.

The tenant, who has lived in the property since May 2008, says he has been complaining to Hackney Council since 2019 with the help of his carer, both in person and on the telephone, reporting the main issues of no heating or hot water and a leak in his kitchen.

The house is said to be so uninhabitable it has three inches of dirty water on the kitchen floor which has been caused by a leak, originating from the kitchen sink that is coming away from the wall. The sink is also blocked and there is a pipe leaking on the floor.