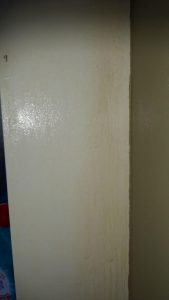 A single mum has told how water runs down the walls of her flat when it rains, despite repeated complaints to the council.

Gemma Parker has lived in Longheath Gardens for the past seven years and says she has told Croydon Council about the problems with her flat. She says it has affected her mental health so badly she has considered taking her own life – as she suffers from depression.

Gemma lives with her son Max, three, who has asthma and eczema, something she thinks is made worse from the damp in the flat. When it rains, water runs from the balcony above into the hallway, bedroom and bathroom of the one-bedroom flat. Gemma has recently moved Max into the living room where he sleeps on a bed behind the sofa as it it the area least affected by damp.

The 38-year-old said that Max regularly gets chest infections meaning he misses a lot of nursery and she is worried about the impact this will have on his development. She said: “They have come and done work on it but the problem keeps coming back.“In March 2020 water was pouring down the walls, you were getting an electric shock if you put your hand on the tiled bathroom wall. The structural integrity of the block has gone, it doesn’t really matter what happens.”

The 38-year-old says she cleans the mould and repaints her walls nearly weekly to keep it looking nice. This year, Gemma got the Children’s Commissioner involved in her case. In April a senior child rights adviser for the commissioner wrote to Croydon Council requesting the family are moved as soon as possible.  The letter said: “These conditions cannot be deemed acceptable for a young child, whose environment has significant impact on his ability to thrive, and it seems his mother has genuinely tried all other avenues.”

Gemma says she has been advised by the council to use HomeSwapper, an online service to swap council housing. But the mum says she would not feel comfortable letting another person live in the flat due to the long-term problems she does not believe can be fixed.
(Source)