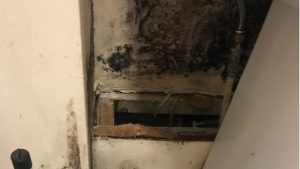 A Hackney Council tenant and her young children have had to live in a mould filled property for months.

A Hackney family is distraught after having to live for four months in a property infested with mould. One tenant living at the property, who preferred not to be named, says the problem has persisted since April. “They don’t care,” she said. The woman, who lives in the council property in Stoke Newington with her four children, three of whom have special needs, says they are unable to use both bathrooms due to the mould and the smell it emits.

The mould became a problem, she said, when the council left a pipe leaking after a repair job. It became so pungent and pervasive that the downstairs bathroom had to be “locked up”, but the mould later found its way into the property’s upstairs bathroom. “My little boy, he’s 12, does not want to use the bathroom and the one downstairs is locked up, where are we going to use? “I had to catch water and wash in the room. We can’t inhale the smell in the bathroom and there’s no windows or ventilation.”

The leak also caused electrical damage affecting the lighting in the house, posing a fire risk.  The council attended the property to inspect damp and mould in the bathroom on May 25 and repaired the leak causing the mould on June 9. A building maintenance team attended on July 23 to survey the outstanding work and all electrical issues in the property have been addressed.  Cllr Clayeon Mckenzie, Hackney’s cabinet member for housing services, apologised for the difficulties the family faced.