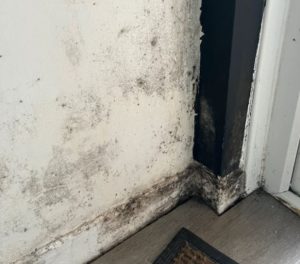 SINGLE mum Sagal Ahmed-Farah and her five kids have throw half their furniture away and live out of bags as black mould has plagued their flat for four years.

Sagal, a carer, 43, has been battling with Camden Council for years to get them to fix her leaky roof, and says her flat smells like a sewer because of the “horrible” conditions.

She pays £704 a month on rent for the flat, which she says is “absolutely freezing”.

The problems first started back in March 2018, when Sagal first noticed a leak coming through the roof in the kitchen.

It progressively got worse throughout 2019 and 2020, with Sagal ringing the council constantly – sometimes as much as 50 times a year – to report the problem.

“Rain was coming in through holes in the roof throughout most of the flat, mainly in the kitchen, corridor, and living room,” she said.

“I called the council out 20 times because I was worried about water going into the mains and causing a fire,” she said.

Because of this, there is no lighting in some rooms – and they have to use a torch in the toilet and kitchen.

In September 2020, the family spent three weeks in a local hotel while the council finally started to fix the roof for leaks.

But shortly after the family moved back in, Sagal discovered drips coming through the roof once more.

Now the state of the flat is so bad that the family are living in a hotel while the council fix the issues.

But they have been told that it could be four months until they can move back in again once more.

Camden Council is trying to find temporary accommodation for the family – but all Sagal wants is her flat fixed.