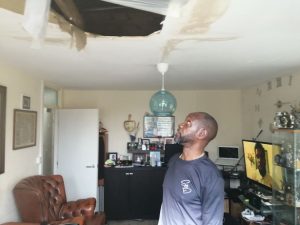 It followed years of complaints from tenants about leaks and flooding.

A Brixton dad says he is “numb” after his ceiling collapsed following years of leaks and flooding in his flat.Basil Clarke’s kitchen and living room ceilings fell in on July 25 after heavy rains. It followed a string of severe leaks over the past seven years. Videos taken in his home over the years show water pouring through light bulbs, destroying his furniture, and leaving his floor covered in inches of water.

The 51-year-old lives in Holles House in Brixton, where many of his neighbour’s flats are also water damaged and prone to flooding. Basil believes his complaints to Lambeth Council have “fallen on deaf ears”. He said: “They don’t even care – I’m becoming numb towards it. Everybody’s just dragged their feet so much. “It’s given me so many anxieties, but I just don’t expect anything anymore.” After a damning ITV London report aired last week, Lambeth Council offered Basil another flat. He said: “I want to get out of here – I’ve had too much of this. To be honest I don’t want to move, I’ve been here for nearly 12 years and it’s my home. “But I couldn’t go through all this again. They’ve taken liberty after liberty, they don’t give a damn, and everything has just fallen on deaf ears.”

An 87-year-old man, who lives on the same floor, said he is afraid when he goes to sleep for fear his water-damaged bedroom ceiling will collapse on him. Dick Burke said: “The leaks have been going on for yonks. It’s not just from the roof, it’s the doors and windows. “One of these days the bedroom ceiling will fall in – it’s water damaged and stained. I’m afraid. It could happen when I’m asleep.” Dick has lived in the flat for 40 years. He said the council hasn’t done any work on the ceilings in all that time. He said: “I keep calling them but they don’t want to know. And it’s not just me, we’re all calling them because everybody has problems. “They’ve put up scaffolding but nobody has come to look at the roof. They’re playing mind games with us.”

ITV revealed last week that Basil’s neighbour Adeola Olutade’s ceiling collapsed on her, injuring her arm. Her neighbour, who did not wish to be named, said he heard Ms Olutade screaming after it happened. He said: “I heard her screaming ‘help, help, help’, if that fell on her child, she would have been stone dead. “The council doesn’t listen – they are ignorant and arrogant and they don’t care.” He told the Local Democracy Reporting Service that tenants pay their rent and should feel safe in their homes.