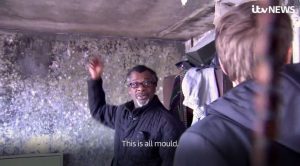 See the appalling and dangerous conditions some people in a tower block in Croydon have been forced to live in for months.

Since 2019, residents of the tower block on Regina Road in South Norwood have been complaining to their landlord, Croydon Council, of leaks in their flats – leaks that have now turned their homes dangerous and uninhabitable.

It is impossible to put into words the appalling conditions we found people living in, in Croydon, south London. Not even the pictures you can see below do justice to the dangerous squalor residents, some of them young children, have been forced to endure for months.

Before you even see the black mould and the damp inside the flats, you can smell it in the corridors. Before you see the water falling from the ceilings and coming down the walls, you can hear it: the tortuous, continuous drip, drip, drip of dirty water into buckets. The damage is so bad, it has been described by both the chief executive of the UK’s biggest housing charity, Shelter, and the former chair of the UK Health and Safety Executive as the worst housing conditions they have ever seen.

There is no doubt that poor housing discriminates.  According to the government’s latest English Housing Survey, 33% of mixed White and Black African households live in a non-decent home compared to 18% of White households, . A “non-decent home” is one with no modern facilities, no effective insulation or heating, or is in a state of disrepair. Thirteen percent of mixed White and Black Caribbean households are more likely to have damp problems compared, to just 3% of White households.