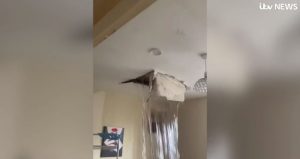 A mother whose ceiling collapsed twice after persistent water leaks in the flat above, has told ITV News her son “could have died” and that her life is being ruined because of poor housing conditions.

Nicole Walters, who recorded a video on Sunday of water gushing through the ceiling, said the debris fell on the spot where he normally sits to play video games. A clip of the moment the water breaks through was shared by a relative and has been viewed 150,000 times on Twitter.

Sunday’s incident was the second time the ceiling has caved in in three years.  Ms Walters said the problems started in her flat in 2017 and since then she has only had “six to nine months” where there have not been leaks from above. In 2018, she was at home asleep on her sofa when a large part of the ceiling collapsed onto her, injuring her foot. The problem is so persistent, Ms Walters told ITV News, that her son says the house “is a leaking house”.

“It shouldn’t have to be like that, he’s only a child but in his mind our house leaks all the time, and that’s not normal, but it’s so sad that he think that’s normal,” she said.

Ms Walters works as a chef and runs a food delivery service, but says the constant problems with her flat are impacting her business. She said: “I feel like every time it gets to a point where I feel comfortable in my business, something happens to the house again and I am stuck and I can’t trade. Even though it ruins my life when it’s leaking, the domino effect of it ruins my life after that because it takes ages for things to get back to normal, and then when normal comes it’s another six months of hell. I’m tired of complaining, I just want a permanent place for me and my son to be able to call home. It’s not fair, I just want to leave, I don’t want to be living in this condition.”

She criticised Southwark Council, who she says she has complained to constantly about the leaks, saying they need to “listen and take action”.

Ms Walters said the council needed “to start listening and taking action because people will lose their lives. “I injured my leg for three to four months, I was unable to work so even after they plastered the ceiling, I was physically unable. All they have to do is just listen and take action.  If you listen early then lives wouldn’t be ruined, my life wouldn’t be ruined.”

Ms Walters believes if she was “more wealthy” then she wouldn’t be in this situation.

She said: “I work hard, I’m trying to build a foundation for my son and I think it’s unfair that, as working class, we have to be going through all this extra stuff because we’re not the higher class because we’re not white why is that? I think if I was a bit more wealthy, maybe this wouldn’t have happened, maybe my voice would have been heard. Being from a black background, I feel there’s a lot of struggles. This is not fair, I’m just trying to build myself for me and my son to have a good foundation and I can’t even have a place to call home.